Review of Ding Dong the Diva's Dead by Cat Melodia 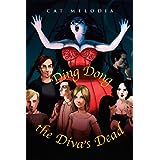 Ding Dong the Diva's Dead is a wonderful combination of mystery, murder and opera.

This story begins with a struggling opera singer named Deborah de Lille. She gets a new gig in Tales of Hoffman as Nicklausse, who is Hoffman's companion. It is a minor role which forces Debbie to dress as a man, but it’s a role Debbie is glad to take, giving her experience. Now, the interesting part is how Debbie came by her role and the mystery that surrounds it. The opera singer before her had died by driving off of a cliff. It was said that the singer had committed suicide.

The knowledge doesn't comfort Debbie, who spends some of her time trying to figure out what really happened to the singer. When she meets the various cast members, there were several that stood out as people who could have committed the crime, especially some of the vengeful and vain leading ladies who would do anything to advance their careers—and have. But there were also some men who could have been heartless and driven enough to do the job, especially those who had relations with the singer or knew of someone who did. But which person had enough motives? Unfortunately, there were several who had something to gain by the singer’s death.

As Debbie's talents begin to grow, impressing many people, she gains popularity, but she finds that her life becomes endangered when someone lets off a smoke bomb in her room, which would have hurt her, if she had actually been sleeping in her bed.

Not wanting to back down, she plows forward, but then strange things begin happening to some of the other cast members, and Debbie's devotion to her career begins to fail. It also puts into question who her true friends in the cast were. There were a few who she could trust, or could she? Will Debbie be able to find the true suspect behind all the tragedies in the cast before she becomes the next victim?

This story is uniquely told through the eyes of an opera singer, using many terms and examples that individuals who are interested in the opera, would know. However, you don't have to be in the opera to understand what is going on. The author does a splendid job mixing her background into the story. The story quickly begins pace as the mystery unfolds before the readers eyes bringing to light many suspects that some readers will be able to relate to in some way. Adults will enjoy this mystery with operatic tones and will cheer for Debbie as truths are uncovered that will surprise the reader. For those who look for a satisfying and just ending, they will not be disappointed.