Show less
Little Meg finds the outside world a bit too loud and far too scary!So, she’s going to stay inside her safe white shell, thank you very much. But then the Howl breaks into the barn and steals Mother Hen! What is she supposed to do, still holed up in that egg of hers? She can’t run and she certainly can’t fly. Well, never get between a chick and her momma, cause this little bird’s got a can do spirit and a whole lot of courage that she didn’t know she had before!
A tale of self discovery that speaks to all children’s fears of the unknown, Ms.Borg delivers a great read –aloud resource for parents and teachers alike. With an onomatopoeic construction that gives life to the story and encourages children to participate through repetition of words, noises, and actions, MEG THE EGG is the perfect story for beginning readers

Rita Antoinette Borg was educated in New York and now resides on the Mediterranean island of Malta. She performs storytelling and creative writing workshops in schools across the country and works as a freelance writer for local magazines and newspapers. Ms. Borg has published four picture books aimed at early readers as well as an anthology of short stories for older children. Her books have been recognized by the Malta National Annual Literary Awards. Her book “Don’t Cross the Road, Holly!” was chosen as the year’s best Children’s Book in English. She is a member of the Society of Children’s Writers & Illustrators. More information can be found at www.ritaborg.us

Come and join me as I talk with author J.E. Rogers for her Austrailian Fantasy Novel The Sword of Demelza on Stories From Unknown Authors http://blogtalkradio.com/storiesfromunknownauthors @ 1 pm EST.


Based on a private journal, memories, and a blog that chronicled her adventure to India, Sandra Bornstein wrote May This Be the Best Year of Your Life to serve as a resource and guide to help others overcome the challenges of living outside their comfort zone. When her husband accepted a job that required extensive international travel, the author was living her version of the American dream in Colorado, never imagining she would be faced with several dilemmas that left her feeling uncertain. After a series of events, she found herself in a life altering experience that placed her alone in a three-hundred-square-foot dorm room while teaching at a renowned international boarding school in Bangalore. This compelling, honest, and edifying memoir shares everything she learned about perseverance, travel, education, faith, and family. Had Sandra never resided in India, she would have missed out on an experience that ultimately enhanced her resiliency, confidence, and passion for life.
Show more
Show less
Posted by Unknown at 11:48 AM 2 comments:

Interview for The Sword of Demelza-A Fantasy Australian Adventure

Come and join me as I talk with author J.E. Rogers for her Austrailian Fantasy Novel The Sword of Demelza on Stories From Unknown Authors http://blogtalkradio.com/storiesfromunknownauthors @ 1 pm EST.


Cynric, King of Demelza, is haunted by his past. In an effort to escape it, he wields a powerful sword, commanding his dragon lizards and a malevolent thylacine, to wreak havoc throughout the realm. Villages are burning and innocent creatures are dying.

Erik and Emma, two young marsupials, and Devon, an orphaned red fox, are on their own personal quests; two to save a life, one to destroy another. When their paths cross, these natural enemies forge an unusual friendship. Soon they hear of the devastation caused by the evil king and they realize that their personal objectives must be put aside. Even though that decision will affect their own lives, and the lives of the ones they love, they are determined to help their fellow creatures. They put themselves at risk by joining a motley crew of animals, whose main objective is to end the reign of King Cynric.

A final battle will take place in the shadow of Fortress Demelza as the king’s forces clash with this rag tag band of creatures from the countryside. The fate of Sunderland and its inhabitants is at stake.

From the Author: The Sword of Demelza is a middle grade fantasy where endangered animal heroes roam the pages, and the Australian landscape comes alive! A glossary at the end of the book provides information about the unusual flora and fauna found within the story, and only on the continent of Australia. Wonderful Illustrations throughout the book will help bring the creatures to life. A sneak peek of The Gift of Sunderland, the second book in the Australian Fantasy Adventures, is included.

J.E. Rogers was born in the Bronx and raised in New Jersey. She graduated from Western Connecticut State University. Besides being an avid reader and writer, she also loves animals, and is especially intrigued by those found on the continent of Australia. Her compassion for endangered species led her to include them in her writing, where she hopes to spark a desire to read in middle graders, while teaching about the importance of protecting animals in the wild.

The Sword of Demelza is a conglomeration of australian endangered species and a riveting fantasy adventure. Children in the middle grades will love the adventure and suspense of this 336 page novel. With characters the reader can relate to, there is a bigger message the author imparts on all. One being the value of friendship.

The reader will become sucked into the story and will delight in the powerful ending. A wonderful story that will touch the hearts of many.
Posted by Unknown at 6:41 AM No comments:

Interview for Angelo: The Unappreciated Ant by Barbara Prignano

Angelo is the smallest ant in his family. As such, he can't work as fast as the other ants and he's certainly not as strong. But Angelo is a very determined little ant and is proud of all his accomplishments. When the family farm is threatened by a big storm, Angelo is told that his help is not needed. Determined to help anyway, he uses his knowledge and skills, setting out on his own to try to save the farm. Angelo: The Underappreciated Ant is a wonderful children's tale that shows even when the odds are against you, perseverance and determination can win the day. Barbara Prignano is an attorney and small business owner on Long Island, New York. Her two young sons are a continuing inspiration. This is her third children's book. She is the author of How Bunnies Got Their Cottontails and Anthony and the Magic Bumblebee. Visit her website at www.prignanobooks.com. Publisher's website: http://sbpra.com/BarbaraPrignano
Show more
Show less

Angelo, The Unappreciated Ant is a meaningful story about a small ant named Angelo who feels unappreciated. His siblings are stronger and bigger than he is, and even though he is small, he can still do everything they can do. But his siblings don't feel the same way and don't believe in him. They feel that he holds them back and is slow in getting chores done interferring with their play time. Angelo feels very sad about how badly he is treated by his own family.

As the story progresses, Angelo receives a chance to prove himself in an unusual way. Will he be able to change his families mind and show them his true worth?

This is a simply told story that many children will be able to relate to and understand. The colorful illustrations enhance the telling of the story. Barbara does a fabulous job creating a connection with the reader as they can empathize with the character in some way or another. The message of the story is subtle, but powerful. Never judge a book by its cover, for its contents may just surprise you. This 28 page story is perfect for young children 5 years old and up.
Posted by Unknown at 3:49 AM No comments:

Interview for The Treasure Bed by Pamela June Cohen

Come and join me as I talk with author Pamela June Cohen for her picture book The Treasure Bed on Stories From Unknown Authors http://blogtalkradio.com/storiesfromunknownauthors @ 1 pm EST. 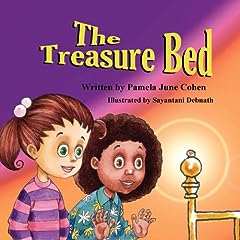 For ages 3-9... Samantha's eagerly awaited shopping day with her mom for a beautiful, shiny, new bed was filled with surprises. It began when her mom discovered a potential treasure while Samantha saw only the " dirtiest, rustiest, rattiest, tattiest, yuckiest, ookiest, ickiest," old bed. Ultimately, Samantha and her best friend, Jaime, saw not only the beauty in their beds, or in the room which looked like something out of Samantha's favorite picture book, or in the mom and dad who worked so hard, they saw also the beauty in themselves through their own re-discovered treasure.

This story is simply told about a child who wants a new bed but becomes disappointed when her mother finds a bed at a second hand store instead of buying it at a furniture store where she had seen the most loveliest of beds. No matter how much the mother tries to explain her ideas to her daughter, she refuses to see the vision she holds in her mind for the bed, and in so doing, might miss out on something very special.

The Treasure Bed teaches children to look beyond what they see and to dig deeper. A tarnished bed may appear ugly on the outside but with a little bit of work and some creativity, beauty can be found very easily. Many things are not what they seem, people and items can hide their true beauty, but for one that looks deep enough they will be rewarded. This story has a subtle message, but one that is very important to all readers. Young children will love the colorful illustrations while learning a valuable lesson.