New Book Review for The Shadows (The Books of Elsewhere, Vol. 1) by Jacqueline West 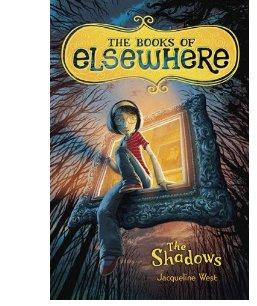 The Shadows (The Books of Elsewhere, Vol. 1) by Jacqueline West

What do you find when you place a curious girl in a house full of secrets? Olive Dunwoody is an awkward and clumsy eleven-year-old girl who moves into a ghostly old mansion with her parents, who are more absorbed in their own mathematical lives than with Olive, leaving her frequently alone. The house was once owned by a Ms. McMartin who recently died, leaving behind her many secrets—secrets that Olive is determined to uncover.

The McMartins’ outcast family had lived in the house for years, their goings-on hidden from the neighbors. The Dunwoodys have bought the house for a good price, making it their first real home, as they have always lived in apartments. When moving in, the Dunwoodys keep the dead woman’s belongings in the house, removing nothing, mixing it up with a few of their own belongings. This allows bored Olive to do some exploring while learning about the history of the McMartins. She cannot believe what she discovers.

There is no mistake that something peculiar is going on when Olive meets three talking cats who are protecting her from an unknown evil that wants the house back. Among Olive’s discoveries are a pair of old glasses that were once Ms. McMartin’s. When Olive puts on the glasses she discovers another world. The glasses manage to bring many things to life—especially antique paintings, which talk and move. The glasses also allow Olive to travel back and forth into the twenty-plus paintings that are secured so tightly to the walls as to be irremovable parts of the creepy house.

Despite the cats’ warnings, Olive becomes careless. On one wandering trip Olive meets an annoying boy named Morton who is trapped in the painting world and cannot get out. Olive is determined to know why. She also wants to find out who exactly wants the house back. The people in the paintings warn her of an evil man, but no one is ever very specific. Olive can tell they are afraid of him. All that she can figure out is that he is willing to destroy her and her family to accomplish his goal. He feels the house belongs to him and that Olive and her family are intruding. The evil is in the shadows that lurk in the dark and in the paintings. It appears like it is everwhere and all consuming no matter which painting Olive is in. The evil arrives as if it were listening and observing. What Olive unearths will not only test her resolve, but will also uncover a family’s lost history—a history better left undiscovered.

The Shadows is a well-written debut book by Jacqueline West that offers many fantasy elements to intrigue the reader. The storyline is similar to the 100 Cupboards because of the paintings that lead to other places, and the Spiderwick Chronicles because of the glasses that can make things come to life. Ms. West has a wonderful and funny writing style that will delight the target audience.

The story does start off slowly, not sucking the reader into it until past chapter five where it begins to exhibit more action. Once the action really takes off—closer to the middle of the book—it is hard to put down. Because of the fantasy elements, the story does become dark. It also mentions witches—a subject that some parents may not approve of their children reading about. Yet the less puritan will enjoy the magical elements in the story.

Overall, this 256-page book for middle-school readers between the ages of 9–12 was a good read. The few illustrations helped the reader visualize what Olive was seeing or going through. The glasses were the only jarring anachronism. An older woman’s glasses should not fit Olive’s face so perfectly nor seem so modern and fashionable in the illustrations, considering that the shenanigans of the old paintings have been occurring for over a hundred years.
Posted by Unknown at 4:15 AM