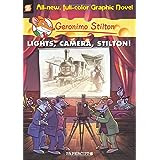 Ever wondered about the birth of movies? In 1895 the Lumière brothers invented the Cinematograph. The two engineers created something that was completely new for their time: a machine that could shoot, develop, and above all, project images. They were credited for inventing the movies.

Like many of the Geronimo Stilton books, there is always something new to learn that will engage and educate readers. In this case the story focuses on the Lumiere brothers and their first attempt at a movie. But they did not know that they were being sabotaged by the pirate cats. The pirate cats wished to be the ones to be recognized for this amazing accomplishment in film. With the help of Professor Von Volt, Geronimo Stilton, Thea, Trap, and Benjamin go back in time to stop the pirate cats from changing history.

The great thing about the graphic novel series is that they tend to have separate plots than the books, which is great for the readers and brings diversity. None of the stories are shortened or illustrated versions of the books. They each are unique and have different settings, plots, and educational value. Children who love history, and Geronimo Stilton, will like what this series teaches them.
Posted by Unknown at 5:55 AM No comments:

Interview with Kayti Nika Raet for The Outsider Chronicles

Come and join me as I talk with author Kayti Nika Raet about The Outside Chronicles Series on Stories From Unknown Authors http://blogtalkradio.com/storiesfromunknownauthors at 1pm EST today. 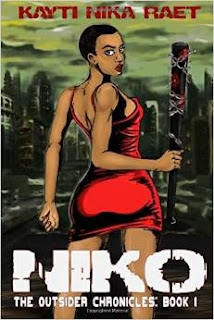 One can live for several weeks without food but only a few days without water, a fact seventeen year old Niko is only too aware of as she struggles to provide for her two younger brothers in a post apocalyptic landscape where the rain burns like acid, food grows increasingly scarce and any Slither that crosses her path is laid low before it can sink its teeth into her. Then one night everything she'd ever worked for and loved is consumed by a raging fire, leaving her with one brother missing, the other dead and herself gravely injured. She's rescued by the Rose Circle, a rogue group of Slither hunters. They sneak her into Amaryllis City, a decadent metropolis where those able to pay the exorbitant entrance fee live a life of relative ease. But for Niko, Amaryllis City is not the haven she grew up believing it would be and her unique abilities as a Slither hunter make her a particularly visible target to a city with hopes of experimentation, replication and other nasty bits. All Niko ever wanted to do was find her baby brother, but that's proving to be harder than expected.

More About the Author

Originally from Brooklyn, New York, Kayti Nika Raet moved down South when she was 11, where she was bitten by the writing bug, as well as other, less friendly insects. She is the author of the Outsider Chronicles, a five book series starting with NIKO and set in a world where the rain burns like acid and flesh eating monsters roam.She's also a reviewer for Readers' Favorite and has her own Youtube Channel: Kayti Edition.When she is not hard at work on her fourth book she has fun reading, listening to K-pop, and photography.Kayti lives in Milledgeville, Georgia.

Posted by Unknown at 5:24 AM No comments:

Interview with Diane Mayer Christiansen for Her Fantasy Series

Come and join me as I talk with author Diane Mayer Christiansen about Switcher and The Secrets of Woodcrest on Stories From Unknown Authors http://blogtalkradio.com/storiesfromunknownauthors at 1pm EST today. 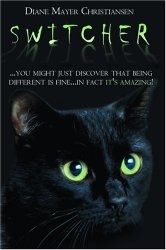 Samantha Schmealy is no one special, really. In her thirteen years she has lived a quiet life with her parents on her family farm. Nothing out the ordinary has ever happened to her, not unless you count the strange goings on at the neighbors house a mile away. She has friends and likes school and likes summer vacation even better. Yes, everything is quite normal for Sam.that is until her parents find out about her very unusual secret, her ability to transform, or switch, into a sleek black cat. There is only one thing to be done. Sam must be sent away for "readjustment." Follow her journey through fear and anger to discovery and self acceptance as Sam and her new friends unravel the secrets of St. Levitius. You might even discover that being different is just fine.in fact it's amazing! 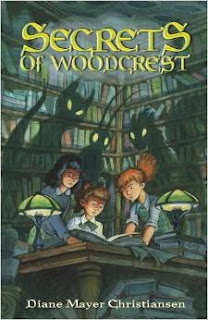 In this powerful and thrilling young adult novel, Sam and her friends are institutionalized at St. Levitius for possessing strange abilities, until the day their lives are forever changed when an uprising occurs and they escape. The girls learn there are others like them—called Uniquians—and they undertake a journey to uncover more information about their history. Amid their search for answers, the girls are pulled into strange and dangerous happenings, the outcome of which could affect Uniquians across the world and cause their extinction once and for all.
Posted by Unknown at 8:49 PM No comments: