The Macomb Intermediate School District is putting on an author festival this Saturday. I have worked with this school district for many years and they always do whatever they can to encourage reading in all of their schools and helps promote us area authors. This is a new program they are hoping to get off of the ground. If you live in the area, come support them if you can. 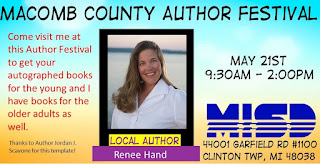 Groundhog’s Runaway Shadow is a fascinating story about friendship and acceptance.

Phil Groundhog was fast in his Hogzilla T-shirt. No matter where he went, how high he jumped, or when he laughed or cried, his shadow was always with him by his side. But as he grew into adulthood, he had more responsibilities and began looking at things in a different way. He was no longer the playful groundhog who had fun doing whatever he wanted. He now had a job and other responsibilities.

It was then he began to realize how different he and his shadow were. They wanted different things. Phil liked vacations at the beach, while Shadow wanted to travel. Phil loved scary movies; Shadow was terrified of them. Even what they ate was opposite. It wasn’t until his shadow began to embarrass Phil that he decided that he could do without him.

Shadow left, and Phil was happy. Well, happy at first. He then began to miss his shadow. Where did he go? Phil didn’t have to wait long to find out. He saw his shadow traveling the world on TV and in the newspapers, experiencing some really great things, and all without him. Phil was envious. Here, in his life he was expected to live, he felt alone and dull. Why couldn’t he be adventurous as his shadow?

This is a story about friendship and acceptance. In order for Phil to ever have a harmonious relationship with his shadow again, he must accept Shadow for who he is and not what he wants him to be, and Phil must also accept himself. Children of all ages will enjoy that message. They will also love the well-detailed in-depth graphics that bring this 24-page story together. The characters are realistic, colorful, and lifelike. Just like in his other books, Biedrzycki brings humor to this fast paced story. He also adds in some of his signature hidden details for readers to discover. Fans of Groundhog Day will enjoy this year after year.

Groundhog's Runaway Shadow
Posted by Renee Hand at 4:31 AM No comments:

Review for One Lonely Fish by Andy Mansfield

One Lonely Fish by Andy Mansfield and illustrated by Thomas Flintham
Bloomsbury USA Childrens
January 31, 2017
ISBN-13: 978-1681192017
Ages 2-5
22 Pages
Children’s Picture Book ​General
One Lonely Fish is a counting book with a bite! With fun shaped pages children will be able to count from 1 through 10 in a fun and simple way.

Each page in this colorful book has ocean characters that are consistently hanging around as they watch the nature of life unfold in front of them. One lonely fish swims in the sea looking for food, but what he doesn’t realize is that he might be the food for someone else who is on the prowl. The odd shaped pages make it very clear that there is always a bigger fish out there.

Young children will delight in counting how many fish show up on the pages. As they get to 10 a surprise awaits them when all the fish, except for one, suddenly disappear.

Children will love the colorful and repetitive pictures in this 22 page picture book. Young children as early as 3 can easily grab the durable pages and begin to count the number of fish as well as to see the number on the page to recognize it.Children will also be able to visually see how the fish are getting bigger the higher the number is, which builds anticipation to the end where they meet the biggest fish of all.

Overall, this is a well-developed, simple concept book, that is visually appealing to young children, and who will want to reread over and over again to learn the concepts of counting and sizes.
Posted by Renee Hand at 5:59 AM No comments:

I will be at the Leon and Lulu special author event with over 50 authors. Stop by and see us. The event is from 11-5pm. I will be there signing my award winning books. 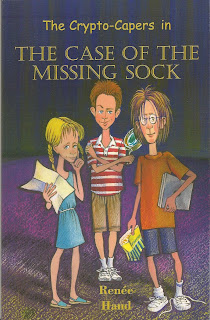 Posted by Renee Hand at 7:26 PM No comments:

Happy 4th of July everyone, and thank you to our military for keeping us safe here and abroad.
Enjoy the day!

Review for Putter and the Red Car by Kate K. Lund

Putter and the Red Car

Putter and the Red Car is the story of one family's cross country road trip narrated by a lively 7 year old Airedale terrier. The book incorporates ideas related to family, change, and geography with a backdrop of brightly colorful illustrations.

This story takes the family from Boston, Massachusetts to Seattle, Washington. With lots of attractions to see as the family travels cross country the reader learns more about the inside of hotel rooms than the amazing outdoors. Granted, the story is told by a dog but even so the author missed the opportunity to educate the reader by making the story more interesting by detailing more of the attractions and cities they had to drive through than being in the car and in various hotels. There was a few interesting pieces such as Mount Rushmore and a tipi museum, but that was quickly lost.

The illustrations weren't as adventurous either showing lots of pictures of the family and dog in the car and in hotels, but again not focusing on the great things going on around them through their travels. Instead of making the road trip exciting and fun, or even using comparisons and contrasting about of the landscapes, the author made it sound boring by focusing too much on how the dog feels on the trip instead of what he sees. The author noted more of the every day type stuff that the reader doesn't need to read this book to know more about, though it is true to its title. The book focuses on the car and the dog.

Though the story is assuredly simple, children who have dogs will enjoy reading a story told by a dogs point of view learning more about how a dog may feel on such a long and tiresome trip. Focusing on a younger age group the kids will enjoy the dogs adventure more, an older age group will need more substance.
Posted by Renee Hand at 6:51 AM No comments:

Review for Blue & Other Colors by Henri Matisse

Brilliantly colorful cut-outs are used to teach colors and shapes in this board book designed with artwork by Henri Matisse.

Blue & Other Colors takes children through Matisse's color palette by showing his various collages.  From simple collages to more complex each page focuses on certain colors. Though the book doesn't focus on shapes, it could have. Matisse uses various abstract shapes in his cut outs where many are randomly set.  The author also focuses on the color blue, yet they do mention various other colors.

Matisse tries to use various shapes, depth, and scale to his cut outs, but many seem very elementary. Children will be able to relate to this simplicity trying to duplicate his work. The text is straightforward, easy for young children ages 1-3 years old to be able to listen to and repeat.

The information about Matisse will interest young readers that is found in the back of the book, though many will not understand his cut out technique. Using gouache paint and various sized scissors to create his affects Matisse really tried to create something different in the later part of his life when his mobility began to fail him. The cut outs in each collage are relateable to children and is something that parents might appreciate as well.

Posted by Renee Hand at 6:04 AM No comments: