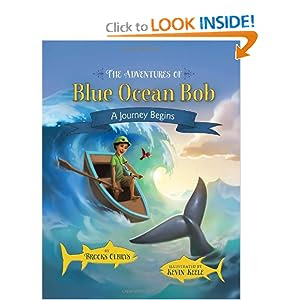 Despite his idyllic island life, young Bob yearns for a greater sense of fulfillment. With his guardian, Xena the hummingbird, at his side, Bob sets out to seek guidance from the wise and happy creatures of the sea.
From the joyful secrets of Al the dolphin to the insightful advice of Doc the turtle, Earl the clam, and Wallace the walrus, Bob uncovers great wisdom. But to complete his journey, he'll need to overcome his fears - and Xena's doubts - and prove himself to Mary Marine, the Island of Roses's leading marine biologist.  The Adventures of Blue Ocean Bob: A Journey Begins is the first episode of a colorful, early chapter book series that provides children with an introduction to timeless principles of achievement derived from the teachings of Bob Proctor, Earl Nightingale, Napoleon Hill, Wallace D. Wattles, and others.

Brooks Olbrys
As a lifelong student of achievement philosophies, Brooks Olbrys was inspired by his young son to make these philosophies accessible to children. With encouragement from best-selling author and personal development coach Bob Proctor, Brooks created the children's book series, The Adventures of Blue Ocean Bob.
A graduate of Stanford University, the Fletcher School of Law and Diplomacy at Tufts, and the University of California at Berkeley School of Law, Brooks is the founder of Children's Success Unlimited and a managing director at investment bank Ion Partners. He lives with his wife and son in New York City and greatly enjoys escapes to the North and South American coastlines.

Kevin Keele (illustrator of A Journey Begins chapter book)
From a young age, Kevin Keele has enjoyed creating artwork in many forms: drawing, oil painting, digital painting, even stained glass. His work has been featured in numerous picture books, magazines, board games, and video games. Though he lives far from any coastlines, he has always been fascinated by the ocean and enjoys illustrating its various creatures.

Kevin is currently an artist for Disney Interactive Studios. He lives in Utah with his wife and two sons. They're the caretakers of one grouchy cat, three chickens, and thousands of Italian honeybees.
Review:
The Adventures of Blue Ocean Bob is a chapter book with many different lessons. It is unique because it is a chapter book developed in rhyme. The author takes the reader on a journey of self discovery through its main character, Bob.
Feeling discontent with his life, Bob decides to go off on an adventure into the world to talk with other creatures to see how they live their lives. Soon, his path becomes turbulent because he tries to figure out what his purpose is in life, which then leads to more questions and more creatures to see.
Xena, the hummingbird, helps guide his way but is also the one who fills his mind with doubt and begins to second guess his journey at every turn. She represents the doubt that we feel in our minds that prevents us from pushing ourselves to do better. Doubt can be a very powerful thins.
But Bob lingers on and his first conversation is with a dolphin. The topic is about appreciating life's every moment. Then onto a turtle named, Doc, who departs the wisdom to look inside yourself and find what motivates you, then dive in and go with that goal. In this case, it is obvious that Bob loves the sea and all of its creatures so wants to be a marine biologist.
But of course to become a marine biologist one must develop a vision and follow it through. But we all know that it's not easy to do. Each chapter is filled with a new challenge that Bob must over come to find his true course in life. The question is will he be able to do it or will he just keep making excuses of why he can't?
This story reflects everyone's life at some point. From doubting our abilities to meeting certain people who guide us in the right direction, to working hard and accomplishing our goals--this book combines it all.
Many children are going to love this 56 page chapter book with its amazing illustrations. The illustrations by Kevin Keele really make the story what it is. The reader feels as if they are right along with the character meeting the sea creatures as he does. Parents are going to love the messages this story brings.
There are a few quibbles. The rhyming is fun, but in a chapter book readers might find it distracting. Some readers will be looking for a tale with adventure and adversity, and though there is much adversity as well as many life lessons, that alone consumes the story as the boy searches for his purpose in life.
Readers will enjoy the animal characters, the amazing illustrations, and the great messages. A delightful story for anyone who loves the ocean and wants to protect all wildlife.
Show less
Posted by Unknown at 4:55 AM No comments:

Interview with Dan Elish for The World Wide Dessert Contest 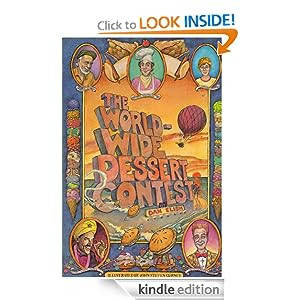 Come and join me as I talk with author Dan Elish  for his chapter book The World Wide Dessert Contest on Stories From Unknown Authors http://blogtalkradio.com/storiesfromunknownauthors @ 1 pm EST.

How the pie gets there - along with three other pies flying in V formation during the twelfth annual Worldwide Dessert Contest - is a double scoop of a story.

It begins with John Applefeller, the annual last-place finisher in the celebrated event that every July draws hundreds of international dessert chefs to compete for the coveted Silver Spoon (and to compete against Sylvester S. Sweet, the self-proclaimed King of Dessert, who always wins).

There's something fishy about Sweet's success, but only Josiah Benson, the Worldwide Dessert Contest janitor, seems to know what's up. And who listens to him? Certainly not the four judges, experts on ice cream, sugar, cakes, and dessert history.

Stanley listens, Applefeller's ten year old assistant, who has helped his boss with his newest and most original contest entry - the world's largest apple pancake. If it weren't for Stanley, Applefeller - and you - would never journey in an apple-souffle balloon to the island of Iambia, or meet Captain B. Rollie Ragoon, the dessert-making genius who has his own reasons for suspecting Sweet of sour deeds, or discover how important heart is to winning.

"The Worldwide Dessert Contest: Enhanced Multimedia Edition" features all the text of the 1998 Orchard Books release, as well an original musical score from the play that the book inspired. Read the story, then click on a link to listen to the companion songs in this cutting edge, one of a kind, 21st Century children's fantasy novel from Alina Adams Media!
Author Bio:

Dan Elish is the author of the novel Nine Wives (St. Martins Press, 2005) and The Misadventures of Justin Hearnfeld (2008), both published by St. Martins Press. Dan is also the author of Born Too Short, Confessions of an 8th Grade Basket Case, which was picked as a Book for the Teenage 2003 by the New York Public Library and won a 2004 International Reading Association Students' Choice Award. He has also written several other novels for young adults including, The Attack of the Frozen Woodchucks, 13, The Worldwide Dessert Contest, Jason and the Baseball Bear, and The Great Squirrel Uprising. "13," the musical for which he co-wrote the book with music and lyrics by Jason Robert Brown ran on Broadway from September 16, 2008 through January 4, 2009. In his career, Dan has also written non-fiction books for young adults, scripts for kids' TV shows (in particular Cyberchase (PBS)), music and lyrics for six musicals, funny corporate videos, and played piano for various Off-Broadway productions. He has received fellowships and scholarships to the Bread Loaf Writers' Conference, the Sewanee Writers' Conference, and is a member of the Dramatist Guild. Dan lives in New York City with his wife, daughter and son.

Current and upcoming projects include a children's novel, The School for the Insanely Gifted, and the forthcoming YA comic-thriller, The Family Hitchcock, based on an upcoming movie. Dan is also working on a musical version of his novel Nine Wives and has been commissioned by Theater Aspen to write a play.

The World Wide Desssert Contest is a funny story about a man named Johnny Applefeller. Inspired by the zany work by Roald Dahl's Charlie and the Chocolate Factory the reader will be taken on a journey of friendship, determination, and self discovery as Johnny works hard to win The World Wide Desssert Contest with his humungous apple pancake. But will his wonderful creation change into something else entirely and ruin his chances like so many times before?

Children ages 8 and up will enjoy this wonderful story. Weaved inside the story is also a unique find. Readers will get a chance to listen to some original music written by the author for this book. As certain parts are read the music will help enhance the reading, giving the reader the feel as if they were watching a musical. A true gem in the e-book world.